As I write this there are still three days to go before the 2014 World Cup begins in Brazil. But for me it has already started as I have now completed one of the important rituals (apart from buying a new England shirt – and, no, I didn’t go for the fancy one with the air vents!) – I have put my World Cup wall chart up. 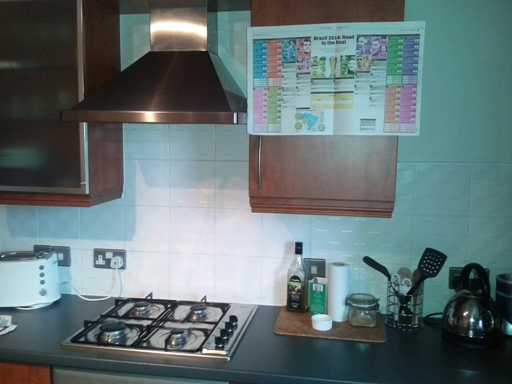 From being a young boy waiting for the poster from Shoot magazine, I have progressed through The Sun in my younger years to the esteemed gentleman I am today and I now have The Independent Road To The Finals chart on the kitchen wall.

Anyway, for a few more days I can consult it and work out who I think will make it to the final game in Rio. As much as I’d like Roy and his merry band to make it all the way, the realist in me thinks that the host nation will emerge truimphant.

Either way a feast of football awaits and given that a good number of the games have very late start times I can be assured use of the big screen TV in our lounge given that there is no clash with the mindless soaps that my better half enjoys (I say “enjoys” but it seems to be a non-stop procession of misery and dissapointment – a bit like following England really!).

Come on you lads!