Although most of my friends and family will confirm that I can be a cynical old sod, hopefully most of them would also recognise that beneath my rough exterior I do actually care a lot about people, and the state of the world we are in.

This wasn’t always the case, and to be honest it wasn’t until I became a dad that I started to pay attention to the world around me. Parenthood has a way of rewiring your brain so you start to see things from the perspective of the safety and happiness of your kids.

To see your kids grow up as caring and well balanced young adults gives an amazing sense of joy – deep, deep joy. To see them take a step into the unknown to help others also gives a sense of pride. Not in the sense that I have done anything, but appreciation for the person they are becoming. (If you’re a parent you’ll undertand this.) 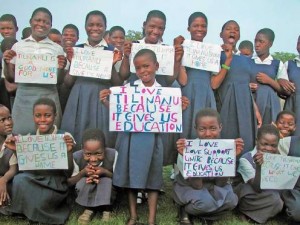 So, I’m thrilled, moved, and just a little bit nervous (although don’t let on to anyone) that my eldest daughter has decided to go off to Africa for 2 months to help in an orphanage. In Tilinanu in Malawi, to be precise (I had to look that up on Google maps to find out wher it was).

She’ll be helping the girls there, and although I know she has a lot to give, I reckon she will get the most out of this experience. She has been raising funds for her trip for the past four months, as well as studying as much as she can about childhood development, and the culture and history of Malawi. No matter how prepared she is, she knows to expect a culture shock.

Mum and I have been promised regular facebook message updates, and although we know she is in good hands we are still just a wee bit nervous.

She’ll be going with a group of other young people, organised by a charity LSU Malawi Volunteers who have been working in the country for a number of years. They help community based projects get off the ground and involve local people at every step of the way. Here’s a video I poached from their website…

So, if you have youngsters of your own, I’d encourage you to encourage them to see where they can help others (they don’t need to volunteer in Africa, there are plenty of opportunities at home). If you don’t, or you have and they are already settled down with kids of their own then you can help support voluntary organisations.

Over the years in my local pub we’ve seen a fair number of Australian and Kiwi bar staff – mostly young people in their early twenties who have are travelling the world and picking up work to pay for it as they go along. I’ve often admired their culture, as it seems like they expect their young to spread their wings and and explore. That’s something in England we don’t seem to have as the norm, so it’s been a delight to meet some very refreshing and optimistic young people involved in the charity over the past few months.

So, Emma, have a wonderful time (I don’t mean to embarrass you), and your old dad is bursting with pride at what you are about to be doing.

OK, normal cynical service will be resumed some time soon. 😉